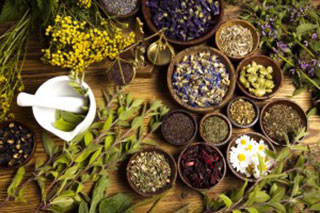 Our therapy of the month for January is Herbalism – here herbalist Emma Dalton talks about the therapy, how she came to be an herbalist and the extensive study she has undertaken in recent years.

Medical herbalism is the original form of medicine going back thousands of years. The science developed into being an apothecary before being superseded by the pharmaceutical industry in the 20th century.  The industry took treatments and determined what they thought we’re the active constituents. They then found ways of synthesizing them and patenting them in order to construct a lucrative industry. For example, aspirin was based on the use of meadowsweet and willow bark as a pain relief. Digoxin (a heart medicine) comes from a synthesized version of Foxglove (digitalis). Chemo treatments use Taxol from the yew tree.

As medical herbalists, we have hundreds of years of evidence to prove how the herbs work with the body.  Culpeper is the famous herbalist who wrote down uses for the layperson and his book is still referred to. However the pharmaceutical industry insists on having Evidence Based Medicine (EBM), and this requires vast sums of money. EBM requires 100 or more people with the same symptoms to be prescribed one medicine and for them to all respond the same.  Unfortunately in Medical Herbalism or many others holistic treatments such as homeopathy, we do not prescribe the same herbs in the same way to many people.  In fact, if identical twins with identical symptoms came to see us, it is unlikely that they would be given the exact same prescription.

In a consultation a medical herbalist will take a full case history, including all prescription medicines, and may also perform a clinical examination. We are trained to do the same clinical examinations, as a doctor would perform e.g. musculoskeletal, heart, lungs, and nervous system. We normally take blood pressure and ask to look at your tongue as well. After taking all of this into account, we prescribe a mixture of herbs that will help to alleviate symptoms. This is normally in the form of tinctures (liquids) but can also be a tea (especially for urinary problems), and creams for skin conditions.

I trained as an herbalist as I was bought up on a farm where it was normal to use herbs for treatment. Both sides of my family were involved in farming and one of my great grandmothers was a passionate user of herbs, homeopathy and Bach flower remedies (she studied with Dr Bach).

I came to complementary medicine when I was 18 and had a severe form of glandular fever that affected my liver. I realised that orthodox medicine could only help so far and I sought to find help and found that through various therapies including homeopathy. My GP was also a homeopath and he encouraged me to train, even telling me who and where to study. The homeopathy training was over 4 years in London and I was taught herbs as well as homeopathy, as herbs are important within this therapy too. I graduated in 2003 and went on to do 4 more years with an anthroposophical doctor, in London, studying herbs, homeopathy and anthroposophical medicine.

In 2010 I found out that Statutory Regulation of Medical Herbalism was proposed in the UK. As a homeopath I might need a specific recognised qualification in Medical Herbalism, if this were to happen, which was only available in three universities, two of which were in London.  After huge amounts of research I embarked on a full time degree at The University of Lincoln, which has the best training in the UK. The course covered the use of herbs, as you might expect, but the majority of the course was actually very medically based: anatomy and physiology, pathophysiology, biochemistry, phytochemistry, pharmacy, research methods, differential diagnosis, and clinical examination skills.

In 2015 I graduated with a First Class Bachelor of Science degree with a First in my dissertation on the use of Silybum marianum (milk thistle) and its use for Non Alcoholic Fatty Liver Disease (NAFLD) and Non Alcoholic Steato Hepatitis (NASH).