On Tuesday, we celebrated World Food Day. This is observed on the 16th of October every year and is dedicated to tackling and making people aware of the problem of hunger. Sadly this still exists today in many countries and according to the Food and Agriculture Organisation (FAO) has been increasing since 2014.

Wasting less food is recommended to be one of the key ways of building a world free of hunger and so this month I’ve chosen a recipe which uses leftover chicken (and it’s also a good way of using up leftover pumpkin from any Halloween celebrations later this month!!)

I hope you enjoy it.

(from: A Bird in the Hand by Diana Henry)

Finely grated zest and juice of 1 lime, or to taste

400ml can of coconut milk

2 tbsp of fish sauce, or to taste

250g cooked chicken, torn into pieces, you can add more if you have it

Halve, deseed and peel the pumpkin. Then cut into chunks about 2.5cm square. Put these into a steamer and cook over boiling water for about 15 minutes.

Slit the chillies lengthwise (you can decide whether to remove the seeds or not (Diana doesn’t) and chop. Remove the tougher outer leaves of the lemon grass and roughly chop the paler hearts. Put the chillies, lemon grass, garlic and ginger into a small food processor (or a pestle and mortar) and whizz until you have a paste. If you’re using a food processor you might need to add a little oil to help it blend. Add the coriander stalks and half the leaves, both chopped, and the lime zest and blitz again.

Heat the coconut oil in a saucepan and add the onion. Cook gently until it softens but is still pale in colour. Add the spice paste. Cook over a medium heat for a minute or two, until you can smell that the spices are no longer ‘raw’. Add the stock and coconut milk and bring to just under the boil. Add the fish sauce and the tomatoes and simmer gently for about 7 minutes ( the tomatoes don’t have to get soft; they should keep their  shape.)

Prepare the noodles according to the packet instructions.

Add the pumpkin, chicken and spinach to the laksa and allow the chicken and pumpkin to warm through thoroughly and the spinach to wilt. Finally stir in the rest of the coriander leaves, the mint and the lime juice. Taste for seasoning. Divide the noodles between four bowls and ladle the laksa on top.

From Nicky Seabrook, our Nutritionist 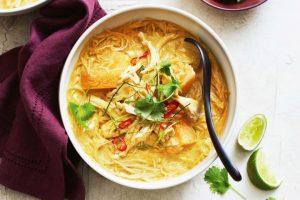