Recipe from our Nutritionist, Nicky Seabrook for Lockdown2

This is a simple recipe which I made on Halloween. It was delicious and definitely one that I will use again.

The recipe says that it is for two people but served with side dishes it is easily enough for four people.

Leeks are an under rated vegetable. They are a good source of magnesium, a mineral lacking by many people and vitamins A, C and K.

inflammatory effect on the body.

2.    Halve leeks length wise and wash. Then slice them not too thinly. Finely slice the mushrooms.

3.    Heat 2 tblsp oil in a frying pan and fry the leeks and mushrooms over a medium heat for 10 minutes, stirring now and then.

4.    Meanwhile roll out the pastry into a large rectangle shape. You only need two thirds so cut off one third. Cut the rest into two equal sized rectangles and place them on a baking sheet.

5.    Beat the egg and brush over the pastry. (Keep the leftover egg for later) Use a sharp knife to score a boarder around the pastry approximately 2 cm in from the edge. Use a fork to prick the middle part only, several times. Bake for 10 minutes.

6.    While the pastry cooks. Peel and finely chop the garlic. Pick off 1 good tblsp of thyme leaves and stir them together with the garlic into the mushrooms and leeks. Turn off the heat. Leave to cool slightly.

7.    Stir in the Italian cheese and remaining egg. Season well. Crumble in the ricotta; mix gently so it’s well combined but leaving some chunks for texture.

8.    After 10 minutes remove the pastry from the oven. Carefully push down any risen pastry in the middle parts leaving a puffed up edge.

9.    Divide the mushroom mixture between the two tarts and bake for a further 7 – 8 minutes, until the pastry is golden brown and cooked through. 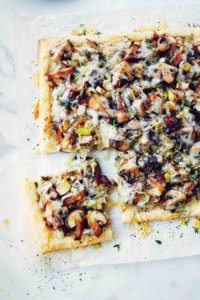