Well, it was a day that I didn’t really know quite what to expect, so I must admit I wasn’t too nervous as, to be honest, I hadn’t had enough time to do sufficient training (but don’t tell anyone!!).  I decided what will be, will be…..we were doing it for a great charity, CCiS Caring For Me, and we had raised a few pennies, so what was the worst that could happen!! 😊

From the moment we got there, the sun was shining, thank goodness, as it would have been a totally different experience if it had been cold, wet and windy.  There were people of various abilities, some clearly taking it seriously “So, I want to make sure that I get a personal best!”, I overheard…………..and others, “Well, I just want to have some fun”, and our Team of 10 fell into that latter category.

It began with, well, “Shall I keep my long thermal vest on, shall I wear gloves??”, it felt like we were preparing more for a night out than a mud race, but having all decided on our chosen attire, we happily jogged to the starting line, and we were off!  It was hilarious from start to finish!  We ran, walked and stumbled together, over ploughed fields and various obstacles, and then there would be a major pile up (just like on the M25), when suddenly one of our obstacles was upon us……….a mud slide into a pool of water, whilst being hosed down as we tried to scramble out of the pit.  We were continually encouraged by the crowd who were in similar fits of giggles just watching us trying to get out of this unfortunate mess!  Then on to rivers filled with, what I can only describe as, pig swill, I didn’t know if it was good for the skin or not, but we weren’t going to get a chance to “not” find out, we had plummeted into this pool of thick, brown sludge which smelt pretty unpleasant but was met with a multitude of smiley faces as it was so much fun just trying to wade our way through and clamber out the other side without coating our fellow competitors as we splashed and fought our way out!

I must say at this point, the pig swill wasn’t the biggest surprise, it was more the man, I reckon in his 60’s or possibly more, wearing just his speedos, nothing else, nothing more………and why not??, but the sight of him kept us amused and talking to the next obstacle!  Then there were walls of sand, where you had to pull yourself up with a rope, (I was secretly pleased, and not smug!! 😊 that I decided to wear my gloves), and then more rivers, and being somewhat vertically challenged, the water seemed to come up higher than most other competitors, but at least it gave me a chance to wash off some of that smelly, sticky brown stuff!  However, that state didn’t last for long as again, we were plunged into more thick mud, swinging on rope swings, and I won’t tell you what expletives came out of my mouth when I let go of the rope to be dunked into the freezing cold water underneath!  But still smiles all around, as we helped each other out, and encouraged each other to keep moving.  Then came the walls of wooden planks, with little nooks and crannies in them in order to twist our mud caked bodies over the top, once again plunging into the darkness below.

And did I say “darkness”, well without any hesitation we were down on our hands and knees, or maybe just pulling ourselves along in the darkness on our bellies, as we navigated ourselves through tunnels, the only light at the end of the tunnel being the other person’s bottom in front, so this created an obvious amount of hilarity!

Then just as we thought we were into a home run, we were beset with my favourite, not, monkey bars!  Having no upper body strength, and seeing the pool of water underneath, it was obvious to me that again I was going to be plummeted into more water…………and yes, I think I managed about two before my grip gave way and another set of expletives, that I will not disclose, were uttered from my mud splattered mouth.  I nearly fell into the water head first, only to have to pull myself out again and “shimmy” my way under chicken wire on my belly, through a pool of sludge.  With the water level only being just below my mouth, it was clearly the right time to keep my mouth shut and to “stop talking”!  With my fellow team mate infront of me and suddenly getting her hair grip caught in the chicken wire, we couldn’t move any further forward until she became disentangled, which only added to the hilarity.  However, we eventually clambered out, once again to be doused down by yet another jet of water but I stood and savoured the sensation, determined to get some of that mud off just so I could see where I was going!

Once again, we were back running through ploughed fields, and our team was still together, well we had lost two, but we knew that they were together, so we did the noble thing and……………yep, carried on!  As we turned the corner, our trials and tribulations were not over, there were at least three walls made of planks of wood that we had to negotiate ourselves over before a final wall of bales of straw with a helpful rope to aid our tired muscles……………..So we continued with our quest, diving upon the walls, not worrying about the consequences, but with bums in the air, legs akimbo we managed to negotiate ourselves over the walls, jumping down the other side with gay abandonment and waiting at the end of the last completed wall of straw for the rest of the team to join us in order to cross the finish line!

Jubilant, we were handed our medals and a can of Adnams Ghost Ship beer each (although I must say us girls would have been more impressed with a glass of prosecco!!, but beggars can’t be choosers), and that was the end of our first Suffolk Whole Hog 2017! We were tired, filthy but happy, like “pigs in s***!”, sorry no more expletives, and I found myself saying to the others that I would definitely do this again next year…………so watch this space! 😊

Here’s a picture of us all before we started, for more photos, please check out CCiS Caring For Me Facebook Page on https://www.facebook.com/CCiS-Caring-for-me-484073835295311/so that you can have more of a chuckle at our expense.  We are still counting the pennies raised for our chosen charity, CCiS Caring For Me, but we shall keep you posted of the final amount.  In the meantime, thanks for reading, and once again, thanks for your very much appreciated support! 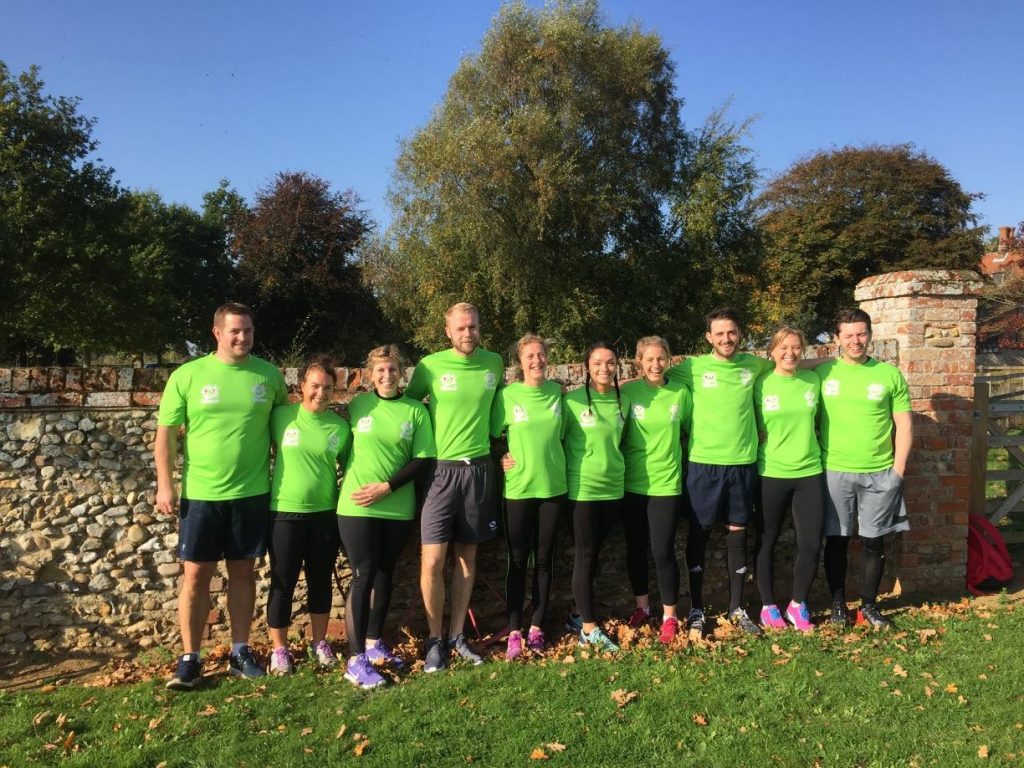 Written by one of the mud nutters, Petra Risbridger.